What would you do with +- 2200 Euros? Build a nice custom Puch Maxi S moped ofcourse! This purple custom maxi by the owner Lloyd is getting very popular on instagram lately and if you look at it, you can't blame it. Great job!

Lloyd (19 years old) is one of the younger generation moped lovers who keeps Puch mopeds alive. This is his second Puch Maxi and his very first custom project ever. Today, the 1979 Daimler & Steyr Maxi went through a complete transformation into this very good looking custom build.

Initially it wasn't Lloyd's goal to build the Maxi for speed, but more for looks. After its first test run with a new ignition and carburator, he decided to try reaching the 100km/h and he's nearly there.

What Lloyd is the most proud of? The colour, the wheels and the carbon fenders. The Maxi initially completed the garbage run and became a cross Puch by the same previous owner. When he bought it, it only lasted two days before a complete stripdown and the start of the custom build.

The moped is nearly finished. It does need some finetuning like bobine fenders and some playtime with sprocket sizes. 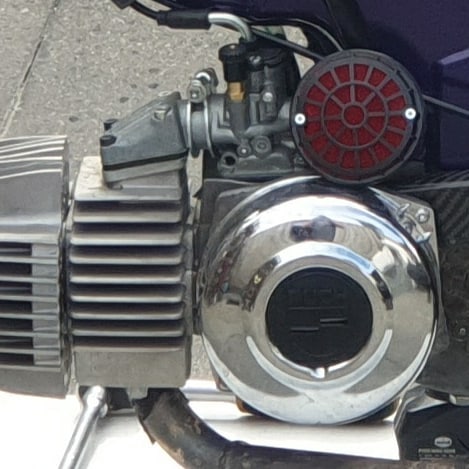 Lloyd carefully selected the following items for the setup of his purple beauty: 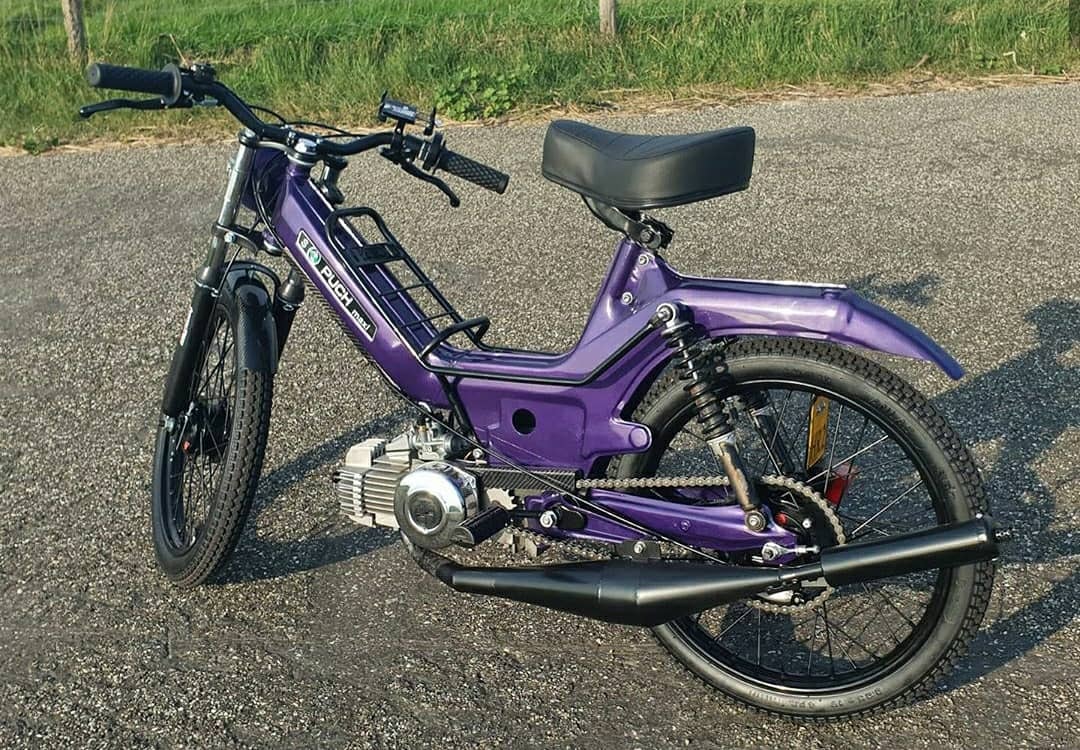 The parts used are very common and not that special, Lloyd citates. But it's the combination of custom parts that makes the Puch Maxi S moped a real eye catcher. Some parts used are street profile tires, the carbon chainguard, carbon front fender, black luggage tank carrier and a black lowered handlebar. Next to that the rear fender is shortened to give it an extra sportive look.

The colour is a 1970s purple from Dodge. It's officially called "plum crazy purple". A lovely metallic colour. 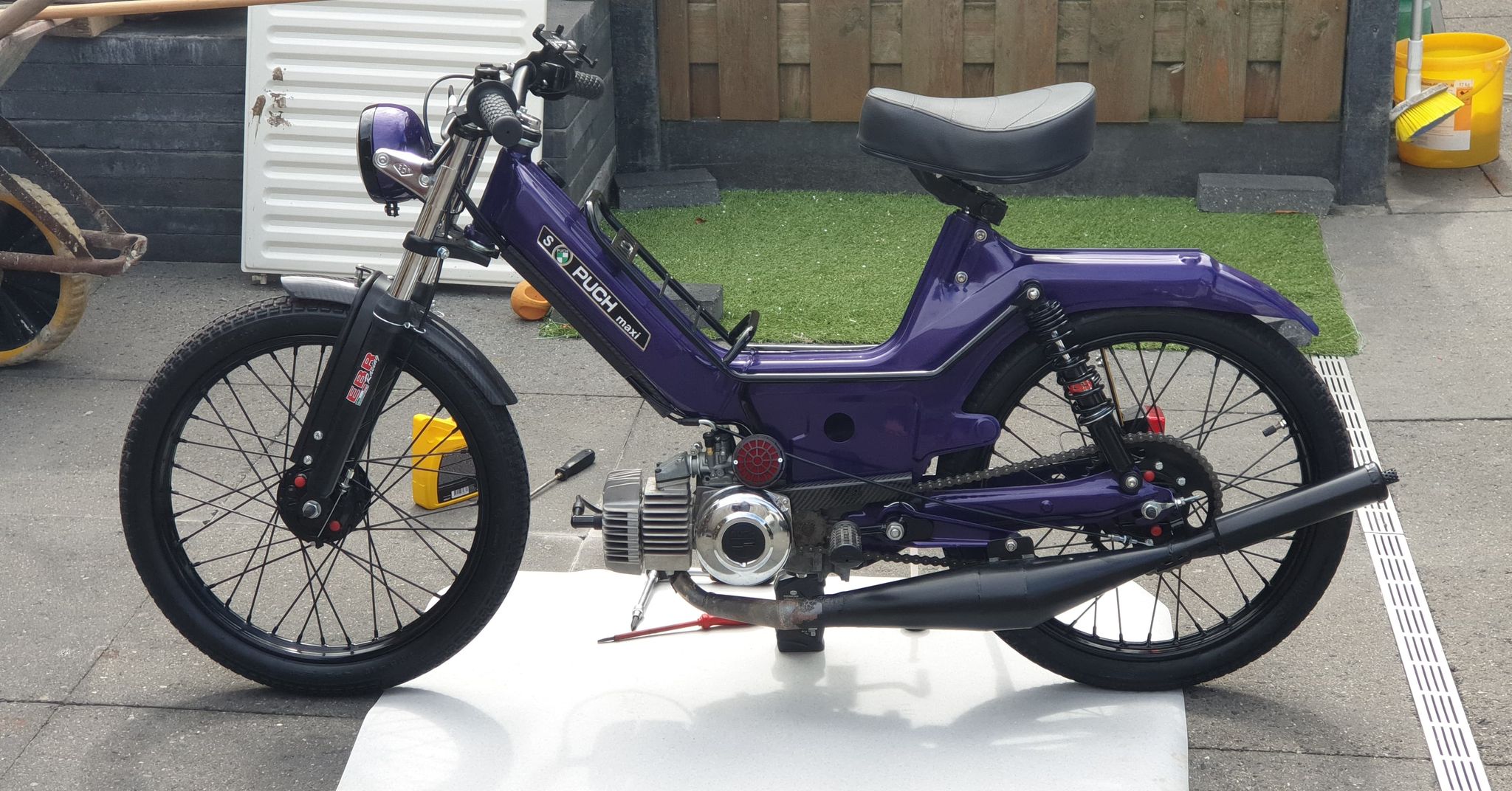 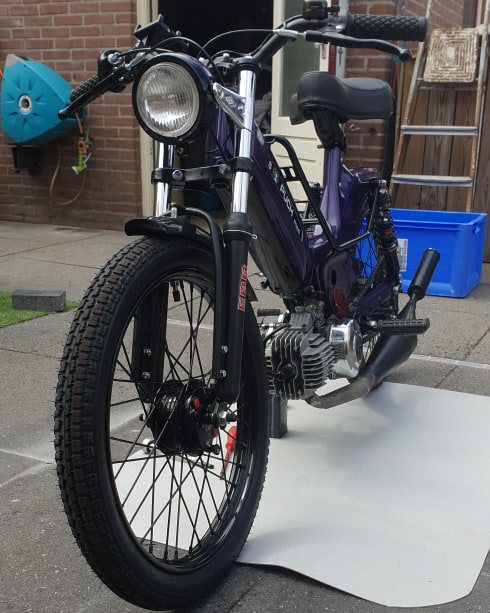 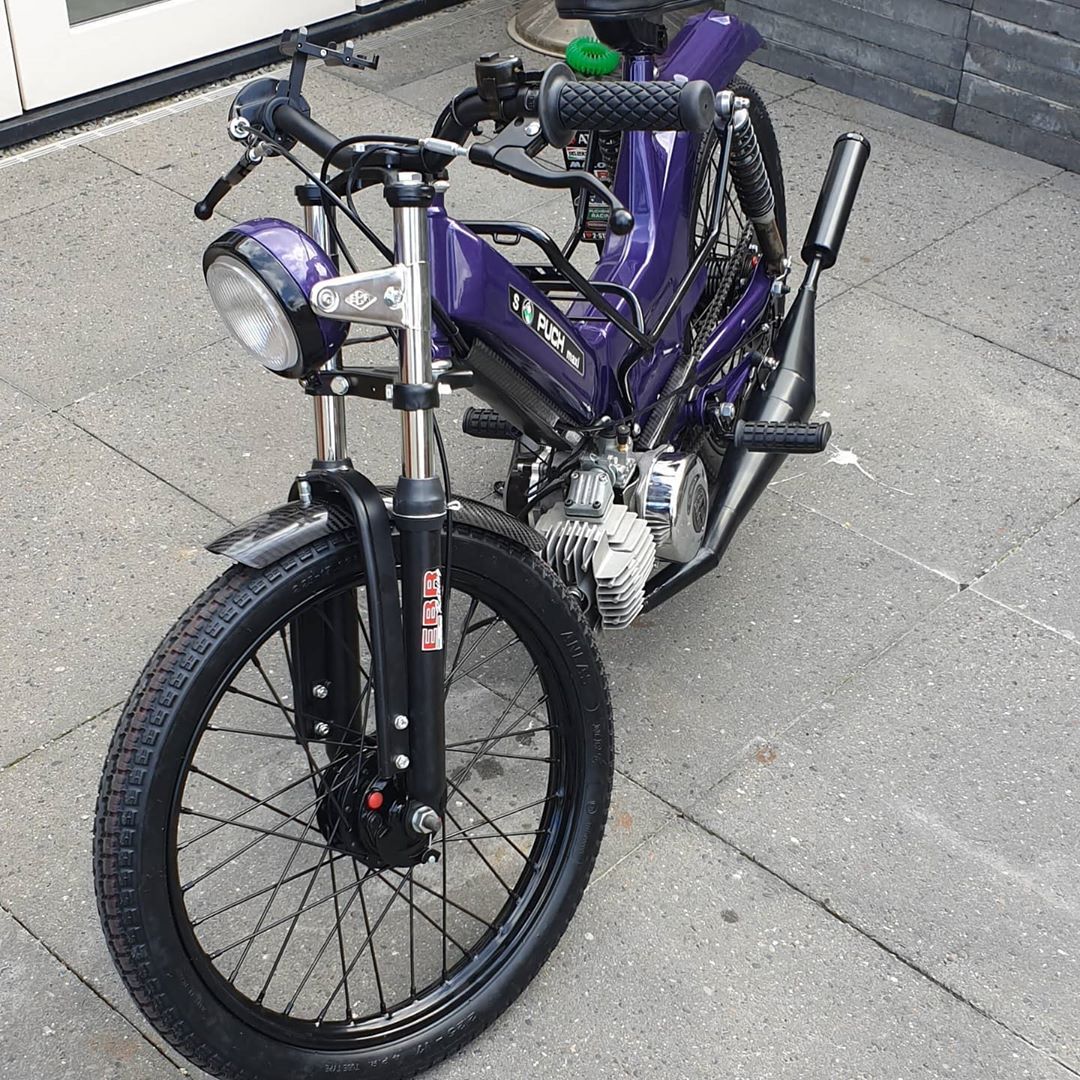 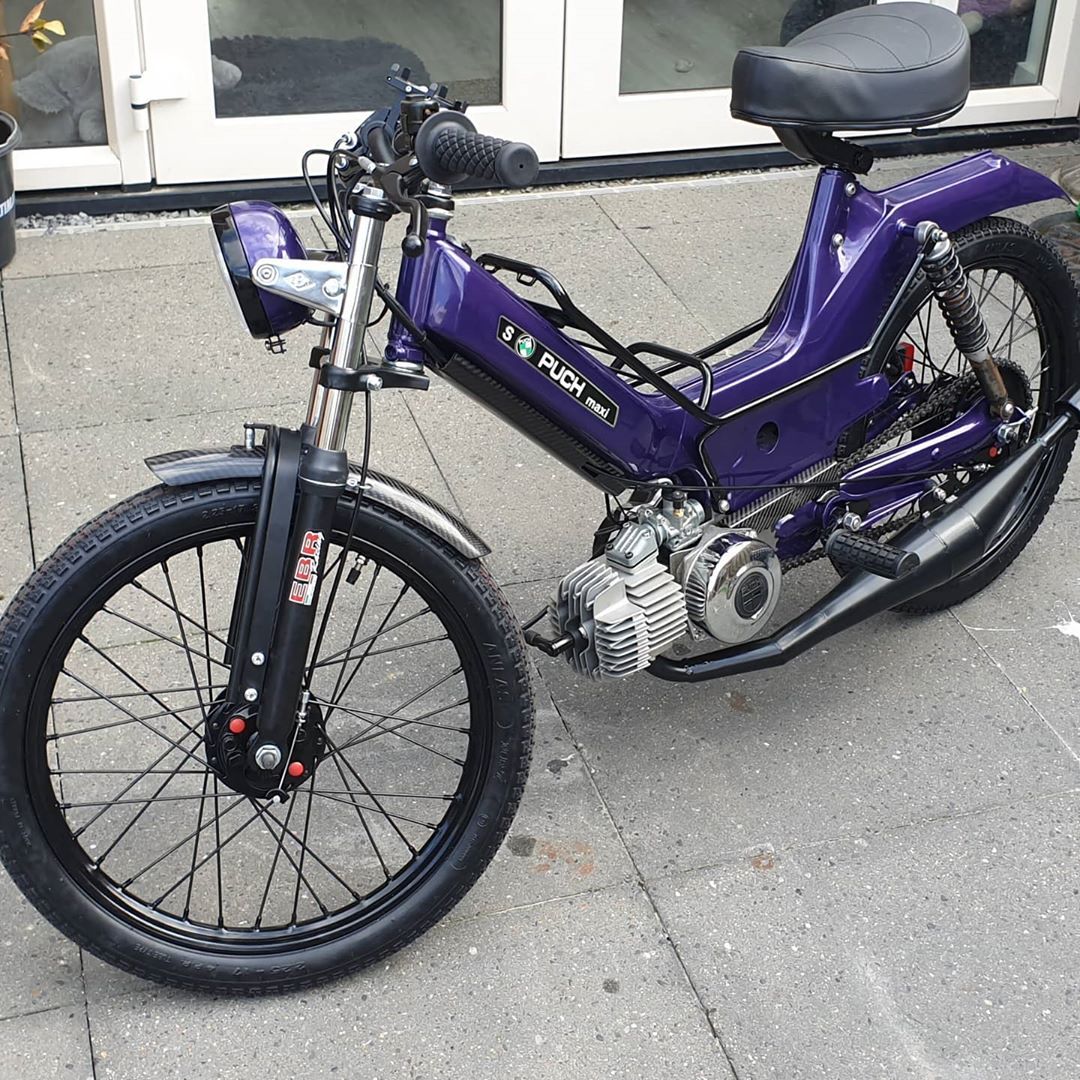 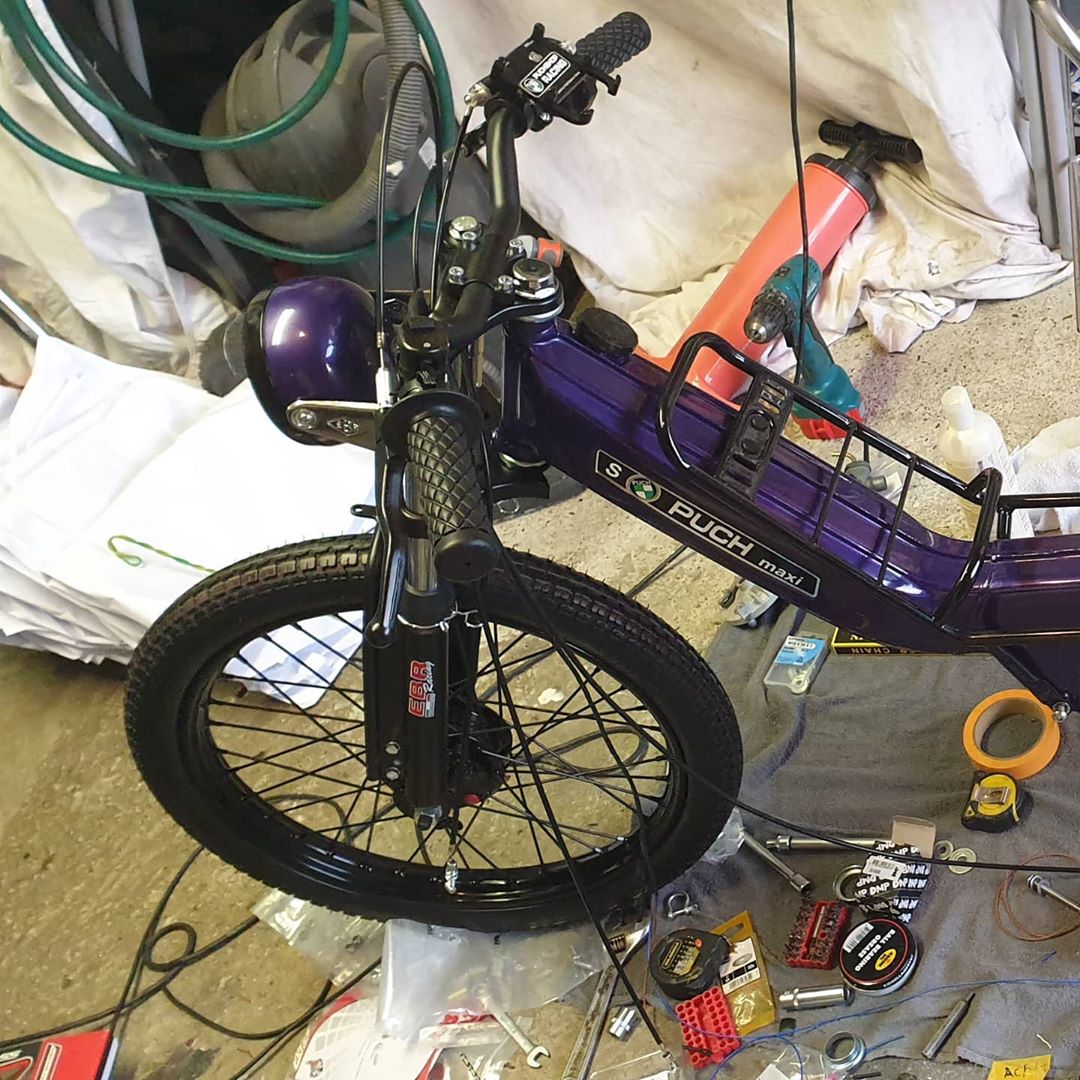 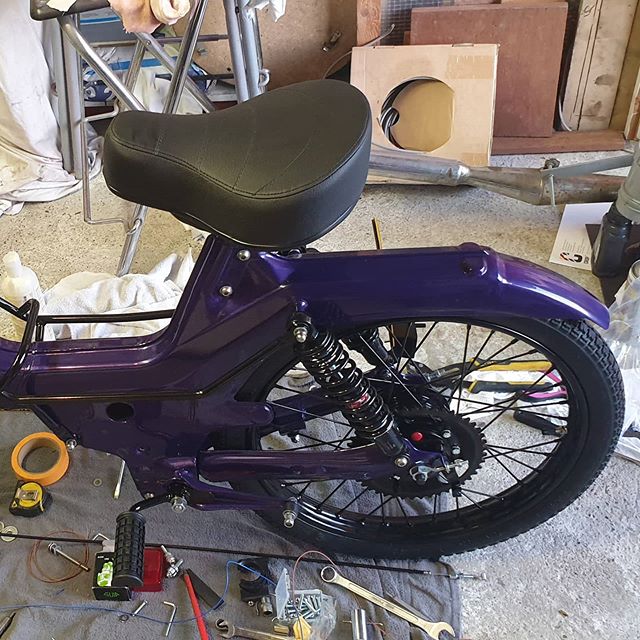 We hunted for the best Maxi's and found these 7 awesome builds. Vote on the projects you like!

Hundreds of setups are added by people all over the world. See what setup you'll need and what topspeed you can expect.

You can only vote once!

Send us your Puch Project

Do you want to show your Puch project with the world?